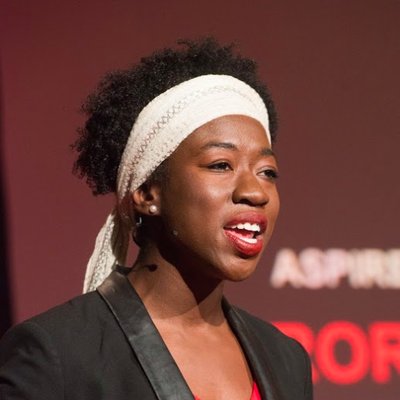 Joy Buolamwini is a poet of code who uses art and research to illuminate the social implications of artificial intelligence. She founded the Algorithmic Justice League to fight the coded gaze – harmful bias in artificial intelligence. At the MIT Media Lab, she pioneered techniques that are now leading to increased transparency in the use of facial analysis technology globally. She established the inaugural IEEE working group to create the first international standards for facial analysis technology. Her TED Talk on algorithmic bias has been viewed over 1 million times. More than 230 articles in over 37 countries have been written about her Gender Shades thesis work which uncovered large accuracy disparities in commercial AI services. Based on her work she was invited to write an op-ed for the New York Times on the dangers of facial analysis technology.

Joy produces media that makes daughters of diasporas dream and sons of privilege pause. Her short film, The Coded Gaze: Unmasking Algorithmic Bias, debuted at the Museum of Fine Arts Boston and her pilot of the Journey To Code training series debuted at the Vatican. Joy won the 2017 Grand Prize of a national contest inspired by the critically acclaimed film Hidden Figures in recognition for her impact journey video essay. With support from the Ford Foundation she created “AI, Ain’t I A Woman?” the first spoken word visual poem focused on failures of artificial intelligence on iconic women including Oprah Winfrey, Serena Williams, and Michelle Obama.

Buolamwini is a Rhodes Scholar, Fulbright Fellow, and Google Anita Borg Scholar recognized as a Tech Review 35 under 35 honoree. She holds master’s degrees from Oxford University and MIT and a bachelor’s degree in Computer Science from the Georgia Institute of Technology. Her final degree will be a PhD from MIT.